Hi hackers and geeks! Today, ZAP OAST was released as Alpha version. (As I told you on https://twitter.com/hahwul/status/1415710990608461827, OAST is a tool for identifying out-of-band, similar to callback, which is very useful for SSRF, RCE, etc.) 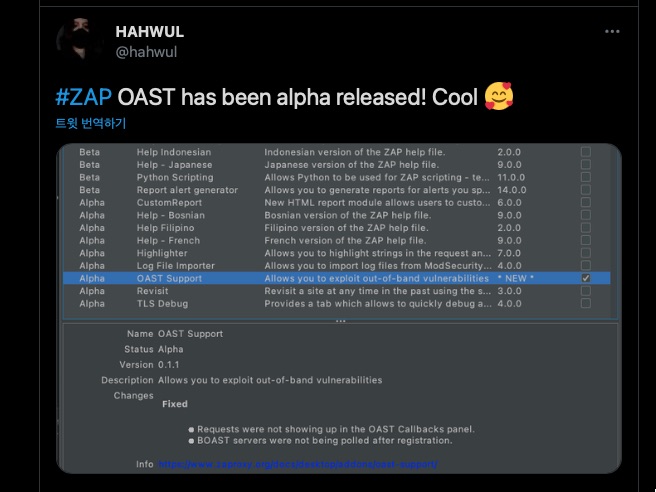 As I expected, there is a pre-configured BOAST in the ‘odiss.eu’ domain. and building and using a custom BOAST server seems to be the good way to use it.

ZAP OAST is a tool that notified users what requests have occurred when DNS queries, HTTP requests, etc. occur for out-of-bound testing, such as the collaborator on BurpSuite and interactsh on project-discovery.

By default, it supports custom domain-based callback servers, such as Burp Collaborator, and you can also configure your own callback server by deploying the open source tool BOAST separately.

It can handle most of the protocols required for OOB testing, such as DNS, HTTP, HTTPS.

Install Support OAST from the ZAP AddOn market place. and you can find OAST menu in Options 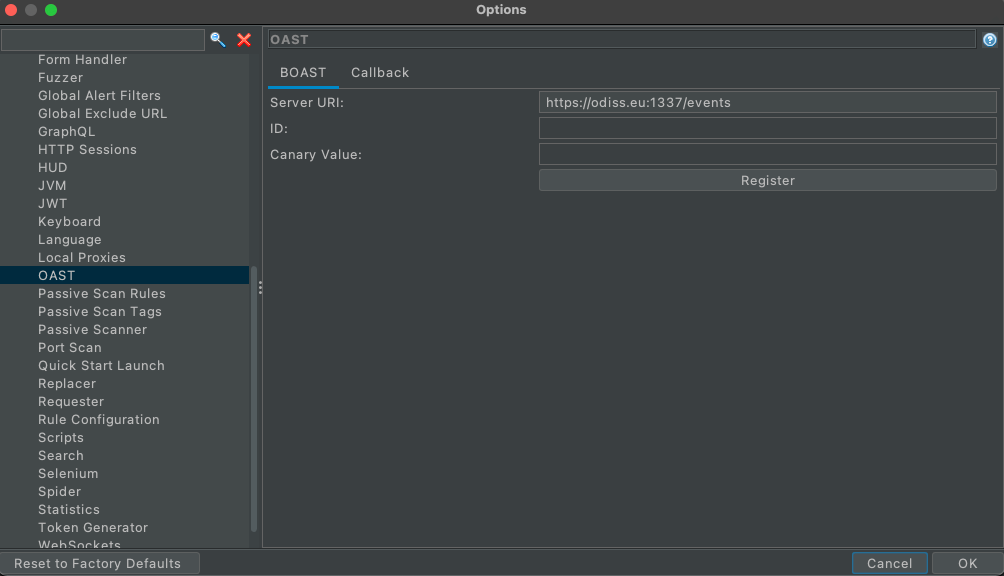 From here, you can get ID and Canary values from odiss.eu by pressing the Register button. 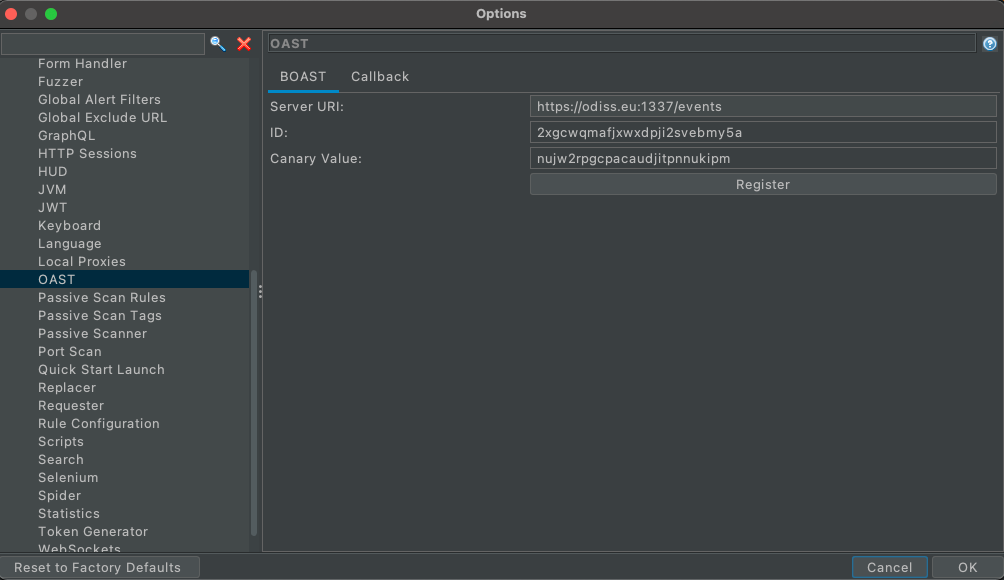 You can take the ID value that you obtained from the Register from ZAP OAST earlier and assign odiss.eu an individual address that can be used for personal use. So, if a request such as HTTP, SMTP, etc.. occurs at this address, you can check it through the OAST Callback tab in ZAP, such as the Burp Collaborator. 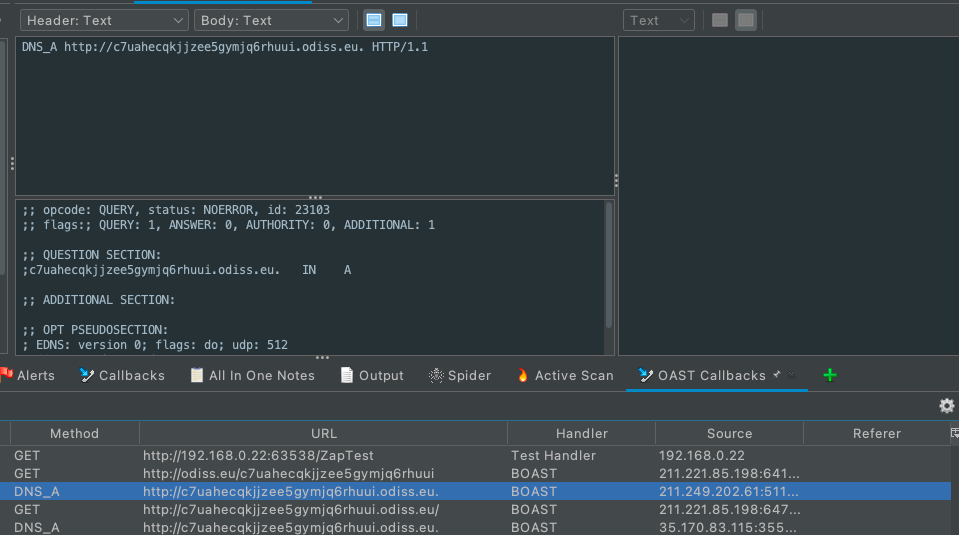 Personally, it’s much better to check the DNS record, so I recommend using it as a Subdomain case.

Using odiss.eu is good, but some of the requests go to odiss.eu anyway.

So sometimes you have to build these callback servers yourself, which can be configured through an open source project called BOAST.

BOAST is a go-based application that can be used as a callback to identify out-of-band, such as odiss.eu, by simply placing one on the server and passing on the domain.

When make is complete, the binary file builded.

It is best to have your own DNS server to use all of the features of BOAST properly. When running, BOAST runs an embedded DNS server, collects/stores domain queries, and provides them to users, which requires that they set up a glue-record for the NS domain.

BOAST sets certificates for https support in API(1337 port) and ssl support in Callback. Of these, removing https from config will not be a big deal for monitor to only http, but the API requires certificate settings because it requires https usage unconditionally.

Create a certificate with Let’s Encrypt and move it in the ~/go/src/agner.io/boast/tls path.

And change format to PEM.

BOAST uses the toml format as config. Each section means the information below.

For more information, go to https://github.com/marcoagner/boast/blob/master/docs/boast-configuration.md. And the config I write for the test is as follows.

I set up only http logging. FYI, ‘storage.hmac_key’ and ‘api.Please change status.url_path’ to a value other than the one in the example. (That’s important information for access)

run!, You can also specify the config file directly with the -config flag.

OOB itself helps to identify many vulnerabilities and is also a very important part of testing, so there was a strong need for OOB tools that can be built into ZAP. It’s great that they were developed and added quickly this time 😍 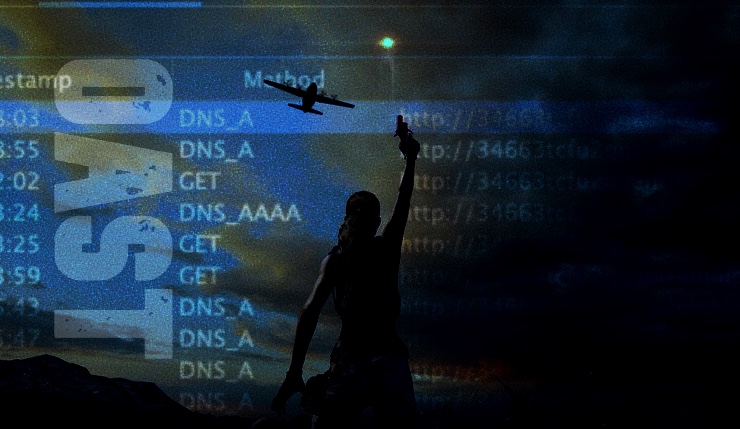 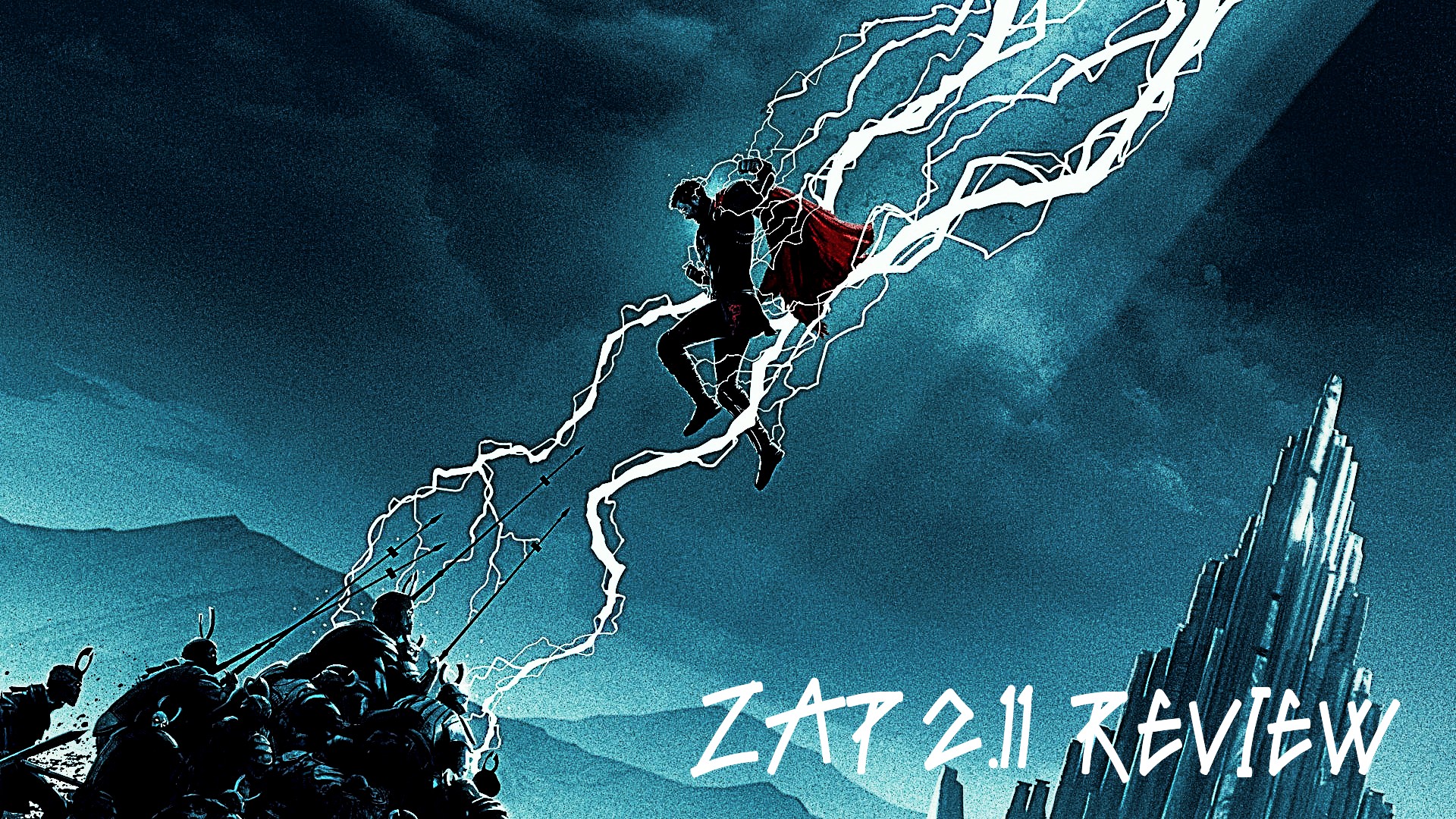 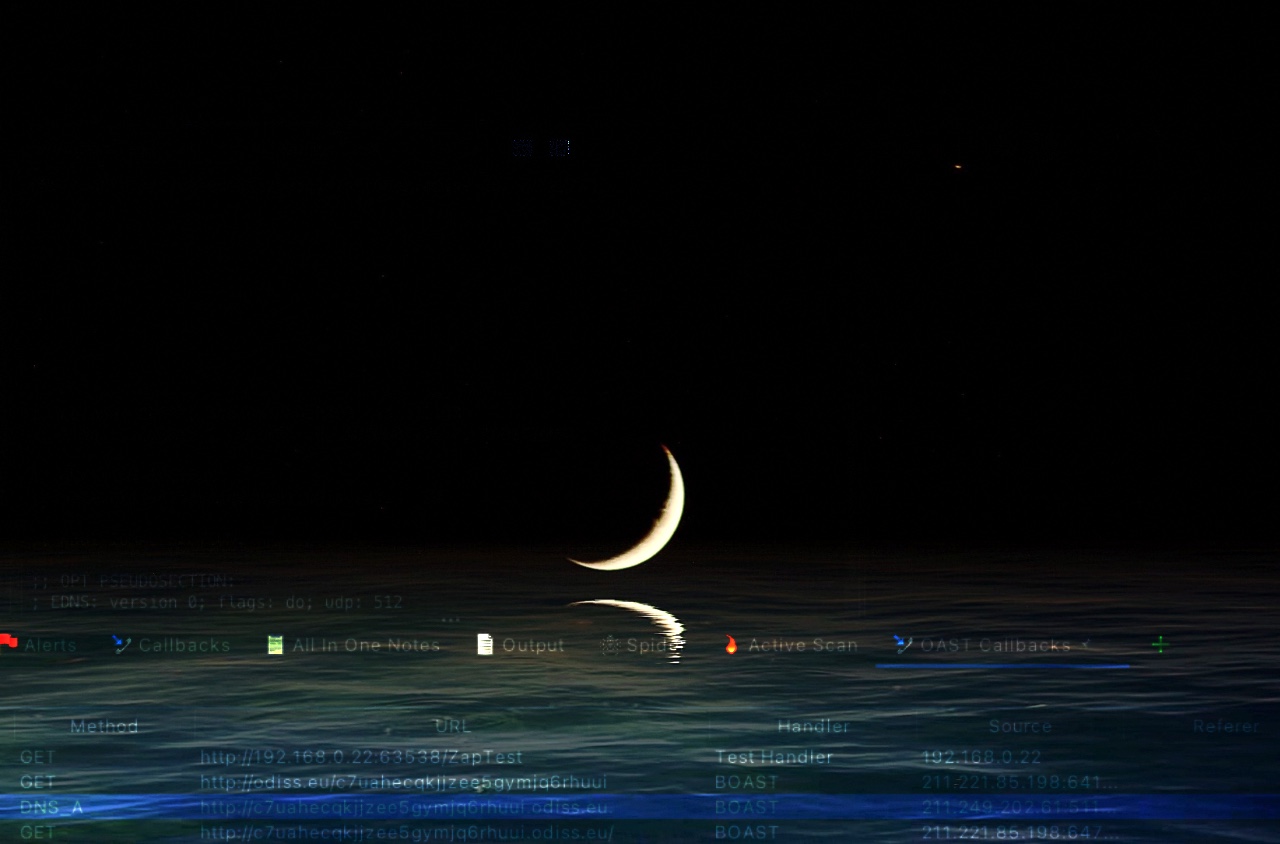 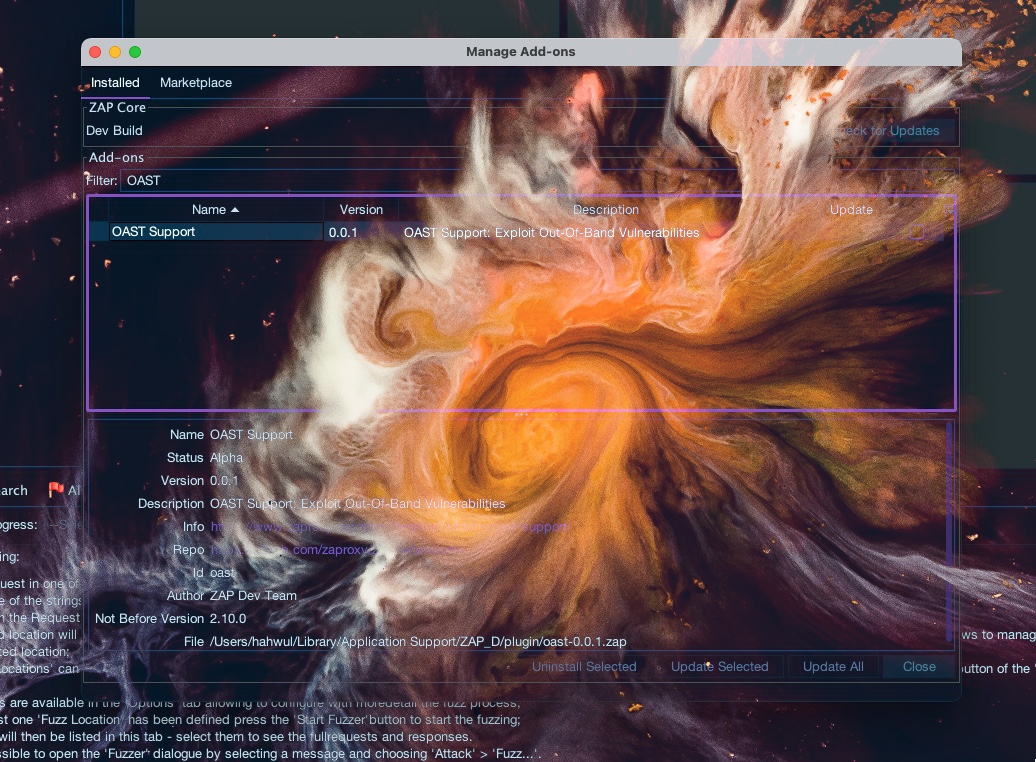 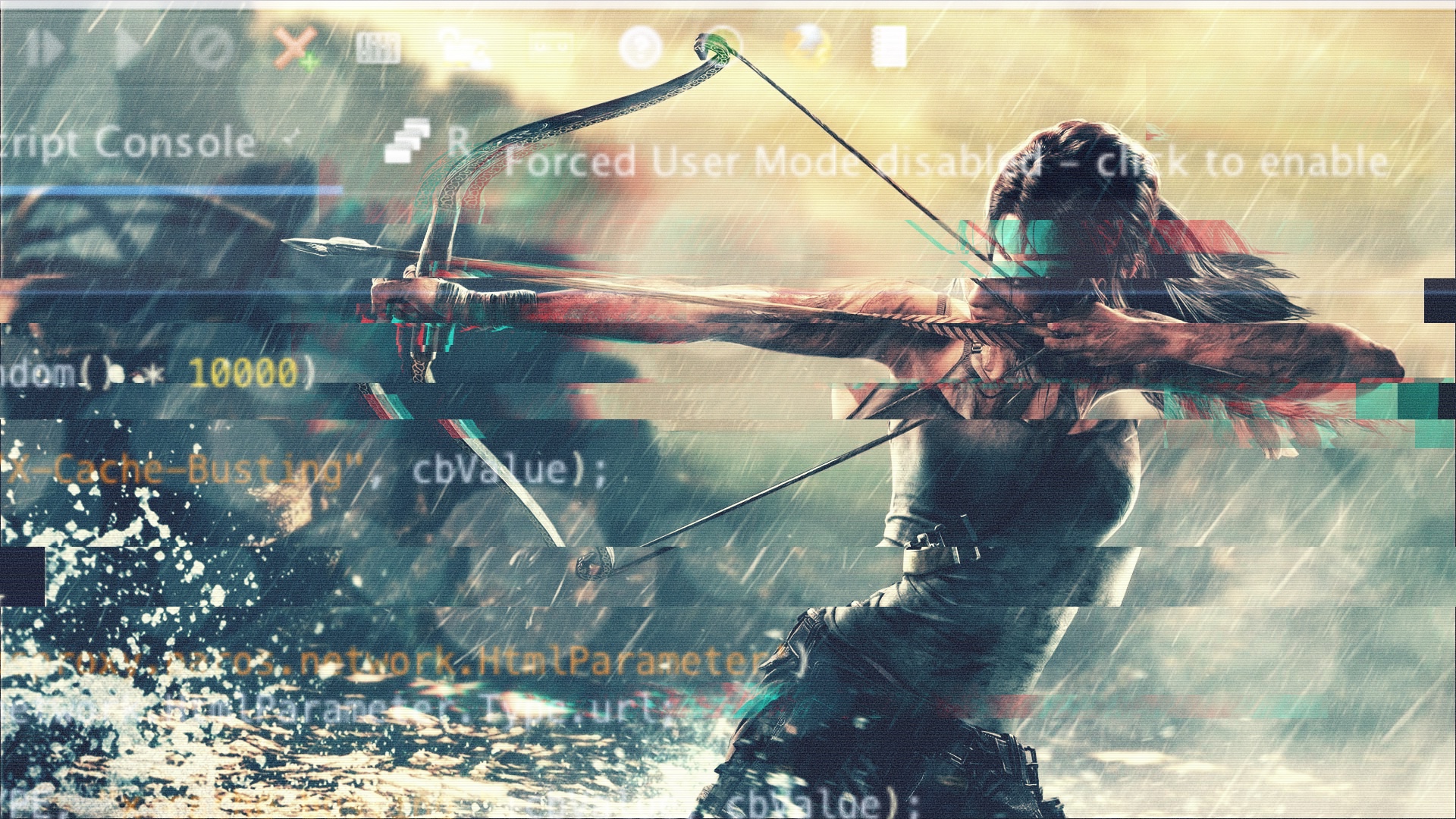